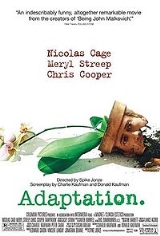 Adaptation. is a 2002 film about a screenwriter who, having trouble adapting a non-fiction novel to the big screen, asks for the assistance of his less experienced twin brother.


Donald Kaufman: Listen, I need a cool way to kill people. Don't worry, for my script.
Charlie Kaufman: I don't know that kind of stuff.
Donald Kaufman: Oh, come on, man, please? You're the genius.
Charlie Kaufman: Here you go. The killer's a literature professor. He cuts off little chunks from his victims' bodies until they die. He calls himself "the deconstructionist".


Donald Kaufman: I'm putting in a chase sequence. So the killer flees on horseback with the girl, the cop's after them on a motorcycle and it's like a battle between motors and horses, like technology vs. horse.
Charlie Kaufman: And they're still all one person, right?


Charlie Kaufman: [voiceover] I'm pathetic, I'm a loser. I have failed, I am panicked. I've sold out, I am worthless, I... What the fuck am I doing here? What the fuck am I doing here? Fuck. It is my weakness, my ultimate lack of conviction that brings me here. Easy answers used to shortcut yourself to success. And here I am because my jump into the abysmal well - isn't that just a risk one takes when attempting something new? I should leave here right now. I'll start over. I need to face this project head on and...
Robert McKee:...and God help you if you use voice-over in your work, my friends. God help you. That's flaccid, sloppy writing. Any idiot can write a voice-over narration to explain the thoughts of a character.


[At a seminar, Charlie Kaufman has asked McKee for advice on his new screenplay in which 'nothing much happens']
Robert McKee: Nothing happens in the world? Are you out of your fucking mind? People are murdered every day. There's genocide, war, corruption. Every fucking day, somewhere in the world, somebody sacrifices his life to save someone else. Every fucking day, someone, somewhere makes a conscious decision to destroy someone else. People find love, people lose it. For Christ's sake, a child watches her mother beaten to death on the steps of a church. Someone goes hungry. Somebody else betrays his best friend for a woman. If you can't find that stuff in life, then you, my friend, don't know crap about life. And why the FUCK are you wasting my two precious hours with your movie? I don't have any use for it. I don't have any bloody use for it.
Charlie Kaufman: Ok, thank you.


John Laroche: Then one morning, I woke up and said, "Fuck fish." I renounce fish, I will never set foot in that ocean again. And there hasn't been a time where I have stuck so much as a toe back in that ocean.
Susan Orlean: But why?
John Laroche: Done with fish.


John Laroche: You know why I like plants?
Susan Orlean: Nuh uh.
John Laroche: Because they're so mutable. Adaptation is a profound process. Means you figure out how to thrive in the world.
Susan Orlean: [pause] Yeah but it's easier for plants. I mean they have no memory. They just move on to whatever's next. With a person though, adapting almost shameful. It's like running away.