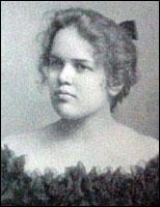 Adelaide Crapsey was an American poet. In the years before her death, she wrote much of the verse on which her reputation rests. Her interest in rhythm and meter led her to create a variation on the cinquain (or quintain), a five-line form of twenty-two syllables influenced by the Japanese haiku and tanka. Her cinquain has a generally iambic meter and consists of two syllables in the first and last lines and four, six and eight syllables in the middle three lines.